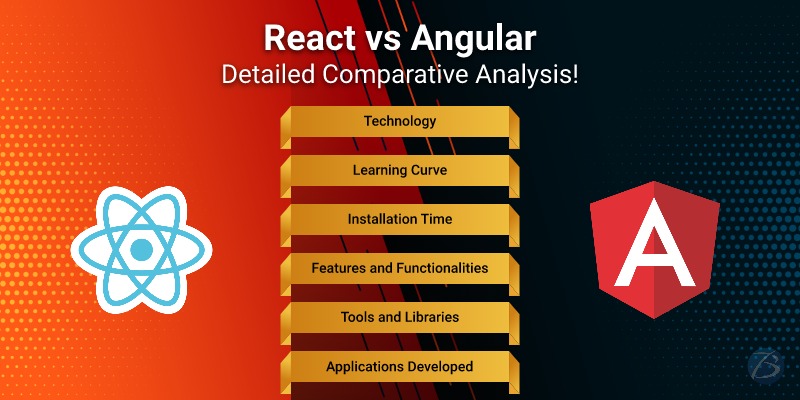 Mobile app revenues were recorded to be 365 billion U.S. dollars in 2018 and they are expected to go beyond 935 billion U.S. dollars by the year 2023, as forecasted by Statista, a reputed portal for statistics. Looking at these figures, we can confidently say that the scope for app development has grown at an exponential rate. Millions of entrepreneurs across the globe are investing in mobile app development services like never before!

But the entrepreneurs and business professionals looking for creating a lucrative mobile app might face some hurdles. So, this article talks about one such hurdle and that is technology selection. Narrowing down the topic furthermore, the article discusses Angular and React- the two JavaScript-based technologies, widely used for creating SPAs. This read will provide you a detailed report on these technologies and help you make an informed decision on which one can be a better fit for your app development needs.

A Detailed Comparative Analysis between Angular and React

Angular: Written in JavaScript and is an MVC framework

React: A JavaScript library that has only view in MVC and needs Flux to employ architecture

Developed in 2016, Angular is maintained by Google’s team to date. It is a complete framework. Despite being a much younger technology in the market, it is widely used for diverse applications due to its reliability. In 2018, more than 600 apps were created in Google alone like Google Analytics, Google Cloud Platform, and many other apps for different business applications.

React too belongs to a good family and is much older comparatively. It is being supported by Facebook. It was first used in 2012 by Facebook for its News Feed functionality and then made open-source in 2013. Today, React is extensively used in several applications and is considered a stable and reliable technology. React has more than 150,000 stars on GitHub.

Learning Angular is quite challenging, especially for beginners, and requires rigorous training.

React is comparatively easier to learn and grasp, but when augmented with Redux, it can become difficult for learning.

Angular: Easy to set up, but at times, can require a longer time for coding which may lead to delayed project deliveries.

React: Though React takes longer to get installed, but once set up, it is considerably faster for delivering applications and other projects.

Angular offers some of the outstanding features and functionalities such as:

Some of the features like forms, HTTP client, etc. are optional in Angular, but some features like dependency injection are built into the framework’s core and Angular developers need to use them compulsorily.

Both, Angular and React, have a huge ecosystem of important tools and libraries associated with them to boost the performance of these frameworks.

Find a more detailed list of Angular tools in our blogs here.

Our article ends with this and we have seen the good and bad of both technologies. There is no winner here, both- Angular and React are apt for certain requirements and business applications. It depends on aspects like features required in the app, app size, budget constraints, skills and size of the team, the platform that you are targeting, when it needs to be out in the market, and several other factors. So, you can decide the best-suited option accordingly.

If you want some expert advice on whether to choose Angular or to go with React app development, contact Biz4Solutions, a renowned React and Angular app development company, based in Frisco, US. We have knowledge of emerging technologies like React, React Native, Angular, Flutter, Xamarin, PHP, .Net, Ionic, Swift, Objective-C, etc. Reach out to us at sales.enquiry@biz4solutions.com for more details.

How to take black hydroxychloroquine akademischesnetzwerk-soe.net

Hot Water Circulator Pump Market What will be the Short-term Impact of Coronavirus?