The leaders in the Africa small hydropower market – ESKOM Holdings, Africa Infrastructure Investment Managers, and Siemens AG – have all held significant shares in terms of value for 2015, despite the governments owning the majority of the projects. The collective share of 34% in value by the above players can be related to the massive volume of the Africa small hydropower market held in government projects and regional players.

As stated in a research report published by Transparency Market Research, the overall competitive scenario within the Africa small hydropower market is likely to remain diverse over the coming years. The large number of service providers is expected to be beneficial to the market’s growth rate in general. At the same time, the overall degree of competition will be determined by the successful and appealing product differentiation brought out by players as well as the maintenance of high value brand identity by the leaders. The Africa small hydropower market is likely to remain a difficult egg to crack for new entrants due to the need to possess expensive proprietary technology. While small hydropower remains a solid source of renewable energy, the rate at which other technologies in renewables is advancing at a swift rate, increasing the threat received by the Africa small hydropower market from alternatives. 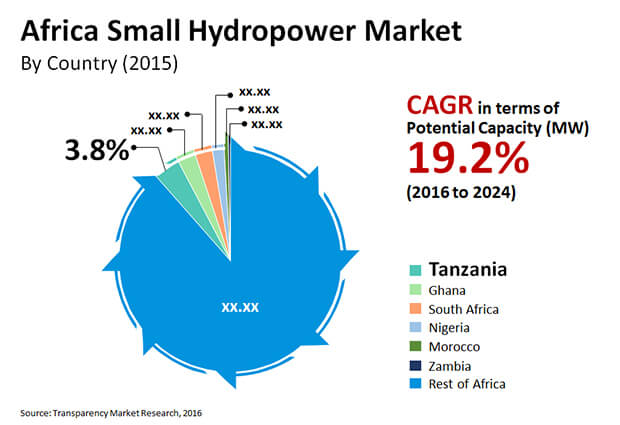 When it comes to power generation, one of the greater concerns in the world today is the provision of greener energy. This impacts a region on multiple levels. Governments today are fully aware of the worsening effect that continued consumption of non-renewables is going to have on other natural resources as well as the integrity of soil, flora, and fauna.

At the same time, renewable energy source present a sustainable and cheap source of energy, a factor of high value for a lot of countries, especially the ones with developing economies,” states a TMR analyst. The overall impact of this driver is already very high and is expected to climb higher over the coming years. Small hydropower projects especially hold a unique spot in renewables due to the fact that they cause little to no change in the flow of the water, increase its temperature, or deplete the oxygen level in the water.

Other factors also driving the Africa small hydropower market include the low cost associated with the overall generation of hydropower in the long run, as well as the lower capital required to setup small hydropower as compared to other renewables.

A lot of regions in Africa are currently out of reach for a number of energy projects, due to their location or the overall lack of technology held by the nations. The Africa small hydropower market is affected by this as well, as the large-scale use of small hydropower becomes next to impossible due to the inaccessibility of relevant technologies to all regions. This is a consistent problem in mini, micro, and pico hydropower projects as well. Other factors diminishing the growth rate of the Africa small hydropower market include the low local capacities of a majority of regions and the absence of supportive infrastructure.

“Off-grid power generation is a highly sought-after and feasible alternative to solve the energy crisis in Africa. Several regions lack the necessary infrastructure needed to create power grids that include renewables on a large scale. However, the use of off-grid small hydropower installations can work in the favor of small areas and help meet their power requirement,” adds the analyst.

Analysis of Potential Impact of COVID-19 on Paints Coatings Market

5 Habits That Make You Rich!