The Story Behind Ganesh Chaturthi 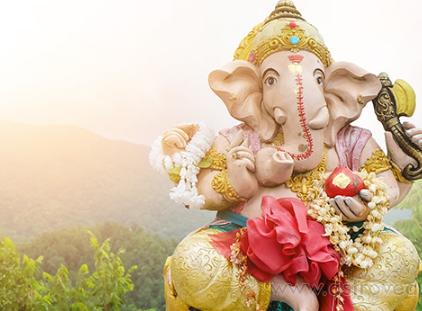 Ganesh Chaturthi is a prominent Hindu festival that is celebrated in India with great fervor. The occasion marks the birthday of the elephant-headed deity, Ganesha, the God of knowledge, wisdom, abundance, and good fortune. It is also called Vinayak Chaturthi or Vinayak Chavithi and is celebrated with great fanfare in the state of Maharashtra.

Ganesh Chaturthi originated during the rule of the Marathas under Chatrapati Shivaji, who started it. The story of Ganesha’s birth is very interesting, because of the fact that he has the head of an elephant. This creates a lot of curiosity to know the story behind it. Ganesha is the son of the Hindu deities, Shiva and Goddess Parvati. Though there are many stories about his birth, the one that is most relevant says that he was created by Parvati. One day, she was about to take a bath when she realized that Shiva had gone out. So she used some sandalwood paste to create a young boy and made him stand guard outside her room, while she took her bath. When Shiva arrived there, the boy refused to let him enter. This enraged Shiva, who cut off Ganesha’s head. When Parvati came out after her bath and saw this, she assumed the form of Goddess Kali and threatened to wipe out the entire world. It fell upon Shiva to come up with a solution and soothe the fury of Goddess Kali. Shiva summoned his followers and told them to find a child immediately and bring him his head without the knowledge of the child’s mother. The first child that the followers saw was that of a baby elephant. So they chopped off its head and brought it to Shiva, who fixed the head on Ganesha’s body and restored it to life. Kali’s rage was appeased in this manner, and the elephant-headed deity, Ganesha was born. All the Gods in heaven blessed Ganesha, and since then, the day has been celebrated as Ganesh Chaturthi.

Preparations for Ganesh Chaturthi begin a month before the start of the festival and lasts for ten days. On Day 1, a new clay idol of the deity is bought from a shop and installed in the devotee’s home. Special Poojas and Homas will be performed at homes and in the temples. Bhajan sessions will be held with families and friends taking part. Huge pandals come up in different localities, and large idols of Ganesha will be installed on them. Cultural events like song and dance performances, sporting events, blood donation camps, etc. will be organized by local committees and cultural organizations. On the concluding day of the festival, the Ganesha idols are taken in procession to the sea or any waterbody and submerged in it. As the procession wends its way to the sea, devotees sing and dance in joy, shouting ‘Ganapati Bappa Moreya’.The ritual of immersing the idol is called Ganesh Visarjan.

Ganesha Pooja begins with the installation of a clay idol of the deity in the home. Many dishes are prepared for the bhog (neivedyam or offering). Ganesha loves modaks, stuffed rice dumplings, and laddoos, so they are definitely included. Other dishes are barfi, karanji, and pedhas. Ganesha’s love of modaks is so legendary that he is known as ‘Modakapriya’ (one who loves modaks). The idol is bathed using pure water and adorned with flowers. Lamps are lit, and arati is performed. Devotees chant bhajans. They also chant mantras, as they believe that this makes the idol come to life. During the festival period, Ganesha is said to visit his devotees’ homes and bestow prosperity and good fortune on them. Therefore, it is a very auspicious day for Hindus.

Fruit basket - A gift of wellness

Best Vastu Shastra Tips For A Happy And Ideal Home

Why It Is Recommend to Construct Temple in Your House