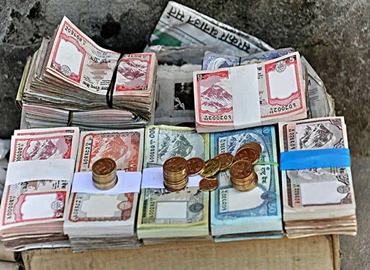 Tourists often plan a journey including Tibet and Nepal. This article will tell more about Tibet currency and Nepal currency.

The official name of the currency in Tibet is Renminbi, which literally translates to People’s Currency and is abbreviated to RMB. People also call it Chinese yuan, which is abbreviated to CNY. You can write either CNY 1,000 or RMB 1,000.

At present, banknotes in denominations of 1, 5, 10, 20, 50, and 100 yuan are in circulation. One yuan coins are also widely used. Due to inflation, banknotes or coins with a value of less than one yuan, including one jiao and five jiao, are rarely used in China. 100 RMB is the highest currency.

Here only refers to the paper money; the coin RMB is not acceptable in Tibet as there is no Tibetan language on it. As the world currency, USD is acceptable in Lhasa and Shigatse at many hotels or restaurants.

If you start your Tibet tours from another city in China, like Beijing, Shanghai, Chengdu, etc., you can exchange money in any one branch of the four state-owned banks. Namely, Bank of China (BC), Industrial and Commercial Bank of China (ICBC), Agriculture Bank of China (ABC), and Construction Bank of China (CBC). But if you come to Tibet from Nepal directly, you can do this in Lhasa, Shigatse, Gyirong, and Purang as well. For a small amount, you can exchange it with our tour guide. For the big one, the guide will lead you to Bank of China, the only bank in Tibet that provides the exchange service of foreign currency and travelers’ checks. Of course, the receptions of some four or five-star hotels also offer money exchange only for the hotel guests. But they need to charge a handling fee, and the rate will be a little bit higher than the current cash buying rate that published by Bank of China.

The current exchange rate of the Yuan is about 7.1 for 1 US Dollar. However, the exchange rate keeps changing and it is better to recheck again before you exchange. We suggest you change all your foreign currencies in Lhasa, the capital city of Tibet, as it’s the most convenient place compared with the other three mentioned before. Here is the information of The Bank of China in Lhasa,

The official currency unit of Nepal is the Nepalese rupee, symbol: रू, abbreviated as NPR. The consumption level in Nepal is very low: 15-30 rupees (0.13~0.25 USD) for a liter of bottled water, NPR 300-1000 (2.51~8.38 USD) per capita for a mid-range restaurant, NPR 35-100 (0.29~0.84 USD) per kilometer for taxi fare. Moreover, tourists can easily exchange money in major cities in Nepal, or pay by credit card. So it is not necessary for foreign tourists to carry large amounts of cash when traveling in Nepal.

Traveling in Nepal, it is very convenient to exchange foreign currency in major cities such as Kathmandu, Pokhara, and Chitwan. The main foreign currency in circulation in Nepal is the US dollar and the exchange rate is usually around 80:1. Euros, British pounds, Australian dollars, Singapore dollars, and other major currencies can be exchanged. But according to NRB (Central Bank of Nepal), not all foreign currencies can be exchanged in Nepal. Therefore, if the foreign currency you carry is less known, it is best to exchange it in the Thamel area of ​​Kathmandu. If you plan to hike, it is best to bring rupees. Because ATMs or currency exchange points cannot be found in remote rural areas, and credit cards are rarely accepted. It is recommended that you change the cash you need into rupees before arriving in Kathmandu. In case the money is not spent, you can sell them back to some money exchanger with a little loss on the exchange rate.

Creepy Things That You Must Have From Halloween Store

Top Tourists’ Attractions In Linz That You Must Visit

Full Guideline For How to Make Delta Airlines Reservation Quicky

Carpooling App Online can be the traffic solution