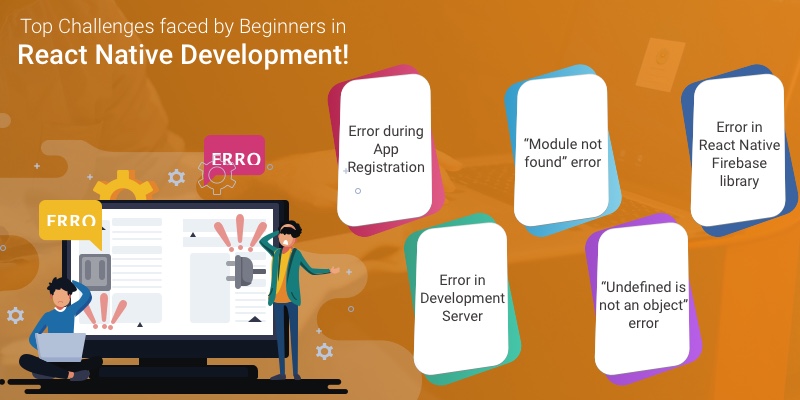 Are you thinking of designing a React Native app for your business or simply willing to hire React Native developers for the project? In any of these scenarios, your developer needs to understand the challenges associated with it. This knowledge will help to deal with the unthought issues and in the long run, it will ensure an enriching experience for the users.

So, in this article, we have outlined some of the most common issues and errors that the developers could encounter with the ways to deal with them. We have also mentioned a few limitations of this framework.

At times, the React Native developers may face the issue in which the screen shows the message- “could not connect to the development server.” This error occurs when there is an issue with the metro bundler. To resolve this, the metro bundler needs to be restarted. So, the developers should turn off the previous metro bundler, then navigate to “Your Project Directory” and hit the command- “npm start.” Lastly, they need to open another tab to run the command- “react-native run-android/react-native run-ios” and this issue gets resolved with ease.

When an app is developed in React Native and the developers run the app, they may view the error which says- “Your App is not registered.” This error message arises due to a small mistake while creating the app- not writing the correct app name in your app.json file. This issue can be easily resolved by simply correcting the app name in this file.

This error occurs when the React Native developers create the .js files in a hurry and don’t give the correct path to it. The issue can be resolved by providing the right path for files.

In case the Firebase library for React Native is not linked or even installed properly, there are chances of getting an error that shows- “Firebase.h not found” or “FirebaseCore.h not found” messages. This issue can be easily solved by either re-installing the library or re-linking it manually rather than automatically.

“Undefined is not an object” error:

When some references are not declared correctly or adequately defined, there are chances of receiving an error indicating- “Undefined is not an object” message. This error can be dealt with by referring to the variable in the description of the issue.

React Native is a vibrant technology and has become very popular in a short time. A growing number of users are choosing React Native development for varying projects. Various tech giants are already using this framework and some have even switched to it completely. But the users must also be aware of its shortcomings along with the errors and issues that may occur during development which are depicted in this article. So, we hope that this article has provided you with the required insights.

Are you looking for the development of outstanding multi-dimensional applications in React Native, for your business needs? Biz4Solutions can help! This is a prominent Mobile App Development company in Texas having 9+ years of experience in architecting new-age apps for global-level organizations. Contact us at sales.enquiry@biz4solutions.com for more details!

5 Technological Trends That Will Transform the Construction Industry

How to Fix wmprph.exe on Windows 10?