Why React Native has become the Winning Choice for Cross-platform Development? 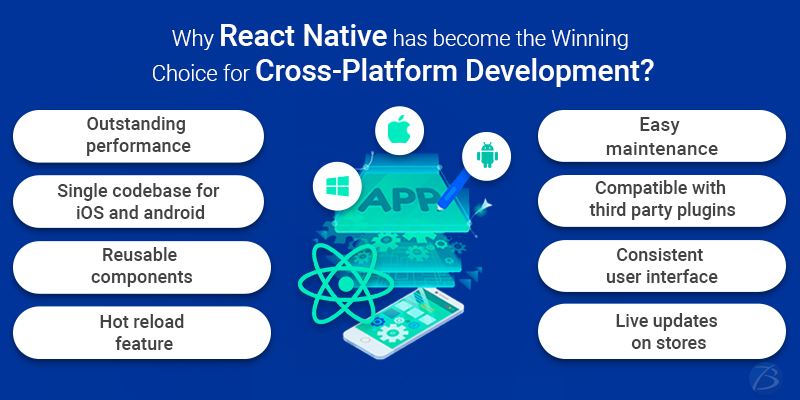 Do the below statements sound like your objectives for your next mobile app?

If yes, then React Native is a one-stop solution to meet all these goals in one go. React Native App development has gained immense popularity in a short span of time despite being an emerging framework. Even giants like Snapchat, Netflix, and Instagram have used it for their apps. Moreover, several mobile app Gurus and tech-savvy enthusiasts claim this framework to be the future of cross-platform app development.

So, this article outlines the top reasons why React Native has become a winning choice for many. Let’s explore its key benefits.

React Native makes use of native controls and modules which aides in building native-like cross-platform apps. Also, the React Native apps render their UI using the native APIs in place of Web View. All this results in the development of stable, reliable, and high performing apps similar to native apps.

Saves Time and Money to a Huge Extent

This framework is considered to be highly efficient as it helps in saving a great deal of time and money due to the following reasons:

Code reusability: The notion “code once and use everywhere” is applicable in React Native. So, the React Native developers don’t need to code separately for Android and iOS platforms. They can reuse almost 80% of the code on other platforms.

Reusable components: There are various ready-made components available in React Native due to which the time and efforts required for developing them from scratch are saved. It speeds-up the development process making it quite hassle-free.

Hot reload feature: In case the developers change or modify the code, it instantly reflects in the app, ensuring the live tracking of the changes. This is called ‘hot reload’ feature which reduces the wait time of the developers and ensures faster implementation of any feedbacks by the end-users.

Easy maintenance and update: Maintaining and updating the cross-platform apps built with React Native is easier and also saves time as there is no need to hire a separate team for different platforms.

Since these apps can be simultaneously launched on both platforms, the app owner scan reach a host of end-users at once. They can conduct their promotional and sales activities with the apps which in-turn results in higher profits.

Third-party plugins are usually considered to be insecure and vulnerable to threats. But this framework supports add-on plugins for easier app development with flexible customization. It supports two types of plugins- JavaScript Modules and Native Modules.

React Native is more like a JavaScript library rather than a framework. It utilizes JavaScript UI to design the user interface. Hence the UI is simple, user-friendly, and has a consistent look and feel. Also, React Native app development runs on Flexbox and SVG that provides a layout of the UI that is compatible with screen dimensions of almost every mobile device, thereby making the apps more responsive.

React Native has a modular architecture that enables the developers to segregate the code functions into the blocks or modules or subsystems. These are interchangeable and free and can be re-used for APIs, making the development process much flexible, and updating process of the apps extremely easier.

This is an open-source community-driven framework where all the technical data and documentation is available for one and all. The experienced React developers can share their expertise and contribute to its progress. Also, it is being supported by Facebook and GitHub. Even companies like Microsoft, Infinite Red, Software Mansion, Callstack, etc. often contribute to this community.

As React Native uses JavaScript as its core language, developers can release the updates into the apps without submitting the changes in the Stores. It enables the developers to make use of tools like expo or codepush from Microsoft to release updates in a short notice. Note that native code if any would require the developer to go through the Stores.

In this article, we have seen a plethora of reasons why React Native App development is being widely preferred for cross-platform apps. This framework has come up as a powerful solution for delivering robust apps while being budget-friendly. The vibrant ecosystem of this framework ensures that it has a dazzling future in the app development arena.

If you want to leverage the benefits of this amazing framework, get in touch with Biz4Solutions, a promising React Native App development company. We have 9+ years of extensive experience in designing new-age mobile apps using React Native.

Why you choose Independent escorts Delhi?