[AnimeFit] Sailor Moon Crystal Is My Show of the Season 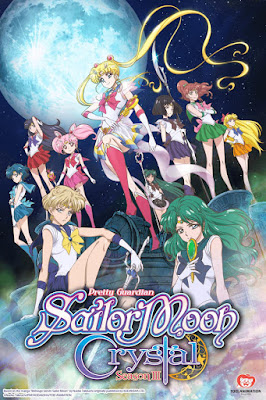 The current season of Sailor Moon Crystal isn’t my only show of the season- but it’s a refreshing drink of water to an extent that most shows can’t touch. There is more than one reason for that: it’s a vast improvement over Crystal‘s first two cours, it’s Sailor Moon in the first place, and it’s Sailor Moon with Haruka and Michiru.

I was ridiculously excited about Sailor Moon Crystal before it premiered, even willing to forgive those first two cours’ obvious direction and production shortcomings… despite what they signaled about how much whoever helmed them clearly did not really give a shit about Sailor Moon. But certain changes to the story from the manga it was adapting, ohoho. I gave up on it.

Then I heard cour two was an improvement, and indeed it was. It better conveyed at least some of what I originally enjoyed about Sailor Moon, and its art suffered from less inconsistency. But this season. This season is the real deal. The characters/my babies are allowed to be expressive and goofy and gel as a group of girls who hang out more naturally than they did in those first two cours. They can do funny faces and be campy. And, like, the ones who aren’t Usagi can do effective attacks. Usagi loves Mamoru and vice versa, but this new season’s shiny new director (also notably one of the few successful female anime directors) Chiaki Kon clearly knows that fans are watching for the girls.

Like every other SM fan watching this, I am also happy about this season’s new, more animation/emotion-friendly character designs, and its transformations not being in 3D. 3D transformations are not a deal-breaker for me and I know Toei likes using some 3D in their Precure franchise, but I’m not a fan of the plastic-y doll look.

Comparisons to previous Crystal aside, this is Sailor Moon. Like so many nerds in my age range, especially nerdy women, Sailor Moon is a very formative series for me. It is my gateway anime, and I’ve bonded with a lot of people over it. Haruka and Michiru were my earliest yuri couple. Though I was not self-aware enough to come out because of them, and the cousin/censoring bullshit they got in English told me “Yo, society doesn’t even like heroic queers”, they did provide me with a positive early example of a lesbian couple. I am so glad Crystal at least got its shit together by the time it got to these two. It’s really a joy to see Usagi, everyone in this reboot, finally getting a director who gets it, though.

As for the story itself- the first two episodes, which I’m reviewing here, cover the first chapter of the manga. I assume that is why the full transformations/attacks for every Inner Senshi were all used once each episode. It’s faithful to the 90’s anime approach and I do like the new transformations and attacks, but it’s something that I can do without seeing in full every episode. I assume they were meant to pad the content out a little so these episodes could cover one chapter.  There are nine more chapters for this arc going forward, but I’m not sure how they’ll be spread out. Episode 3 looks like it will cover the next full chapter.

Transformation and attack reuse aside, though, I have no complaints about the pacing so far. The story is moving briskly, effectively setting up plot threads like “here is the new enemy and what they want”, “some weird stuff is happening with Hotaru”, “Chibi-Usa’s is befriending Hotaru” (which really is Chibi-Usa’s best storyline- she’s better with a foil and a significant good friend, and it helps her demonstrate her growth since her introduction to the franchise), “weird stuff is happening with Mugen Academy”, and “omg the two ~mysterious~ Mugen Academy students who are awesome at swimming and violin-playing and race car-driving and apparently travel by helicopter are being ~mysterious~.” Not to beat the “Crystal has improved” horse to death, but the first two seasons didn’t suffer from not being plotty enough. This season’s strength is that it’s leaning more strongly on the appeal of its cast while, so far, not making any story tweaks that mess with what folks have historically loved about Sailor Moon.

My girlfriend and I watched my Blu-Ray copy of Takarazuka’s Phantom this past week and started the Rose of Versailles anime (a rewatch for me- I am so damn excited to see what she thinks as it becomes increasingly good), and it drove home the obvious Takarazuka influence on HaruMichi, particularly Haruka. There isn’t much actual in-story romance for them yet, though they are obviously a couple and their classmates know it. The show’s current ending theme plays them up, too.

I am loving this season of Crystal, but should note that it is clearly aimed at folks who are already familiar with Sailor Moon. Unlike the 90’s anime, Crystal makes no attempt to hide who the mysterious new Mugen Academy couple are. And I am okay with that. This season is pandering to me as a Sailor Moon fan and as a HaruMichi fan, and I am eating it with a spoon and licking the spoon. Then getting another serving.

In Case You Consider As Being A Physiotherapy Assistant?

Purchase Instagram follower at low price without any fraud