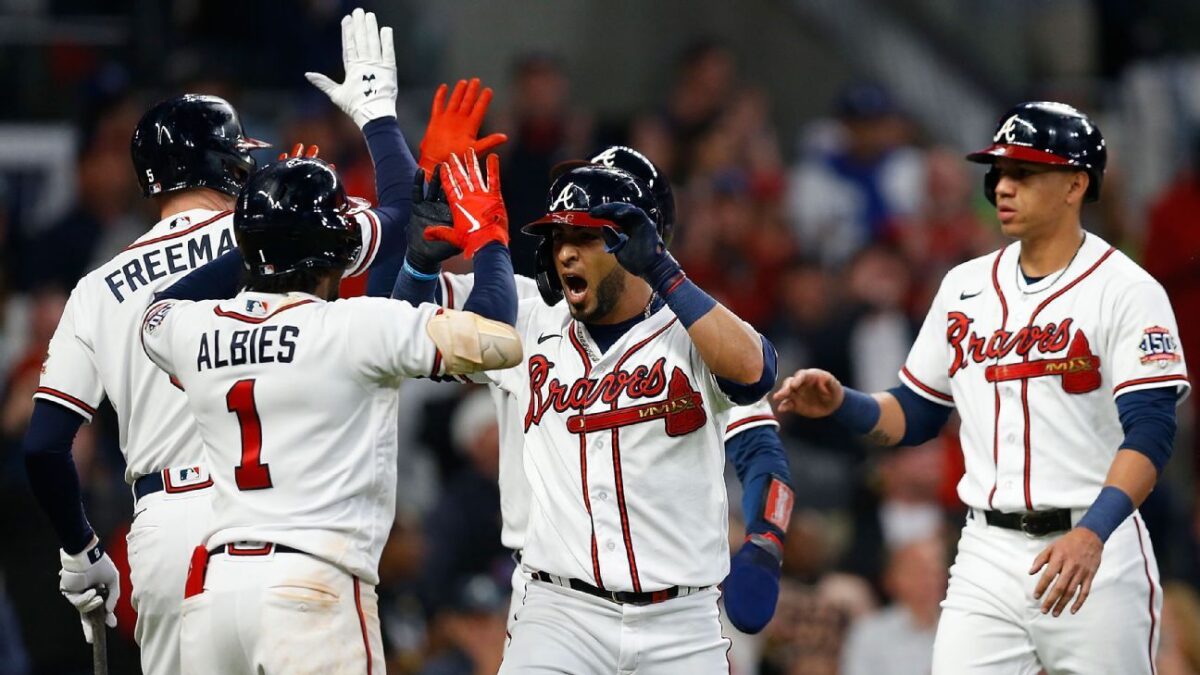 ATLANTA — For the first time since 1999, the Braves are going back to the World Series. Eddie Rosario continued a torrid postseason with a three-run homer just inside the foul pole in the fourth inning, breaking a 1-1 deadlock and propelling Atlanta to a 4-2 win over the Los Angeles Dodgers on Saturday night. One season after the Braves lost to the Dodgers in a seven-game National League Championship Series, Atlanta knocked off the defending champions in six.

The Dodgers got the tying runs on base with no one out in the seventh, but lefty reliever Tyler Matzek came on and struck out three straight to electrify a thundering Truist Park gathering. The last of the three was former MVP Mookie Betts.

Rosario, who was named NLCS MVP, went 2-for-4 with a walk and finished the NLCS with a .560 average, 1.040 slugging percentage, three homers and nine RBIs in six games. Braves

According to Rosario, he’s not done.

“It’s truly a great moment, not just in my career, but in my life as well, but I want more,” Rosario said. “I want to win the World Series.”

The loss ends the title defense of the Dodgers, who won the World Series after last year’s pandemic-shortened season. It was an abrupt end for Los Angeles, which won 106 games during the regular season and beat the 107-win San Francisco Giants in the NL Division Series.

Instead, it’s the 88-win Braves who take the NL pennant during a season in which they did not climb over the .500 mark until Aug. 6. According to the Elias Sports Bureau, that’s the latest first-day-over-.500 date ever for a team that reached the World Series. The previous record was Aug. 3, held by another version of the franchise — the 1914 Boston Braves, known to history as the “Miracle Braves.”

While the 2021 Braves looked like a long shot to end their pennant drought when the postseason began, nothing about the way Atlanta dismantled the Milwaukee Brewers during the NLDS and the Dodgers during the NLCS seemed miraculous.

“There was a big upside to our club the last two months,” Braves general manager Alex Anthopoulos said after the game. “And if you’re into things like run differential, the Giants, L.A. and us were right there in the top three. We felt that we had the talent to do it.”

The pennant is the latest step for a franchise that began a long rebuild during the middle part of the past decade and reemerged as a contender in 2018. This season marked the Braves’ fourth straight playoff appearance. Saturday’s win snapped a string of 12 straight postseasons for the franchise without a World Series appearance, tied with the Oakland Athletics for the longest streak of that kind.

Braves starter Ian Anderson held the Dodgers to one run over four innings before giving way to a pinch hitter during Atlanta’s fourth-inning rally. A.J. Minter came on after Anderson and set down all six batters he faced, striking out four in a dominating performance.

The dual dominance of Minter and Matzek, a pair of lefty relievers from Texas, preceded a perfect ninth by closer Will Smith and continued a strong playoff run for the Atlanta bullpen. Opponents are now 0-for-15, including 11 strikeouts, with runners in scoring position against Matzek during the playoffs.

“What Minter and Matzek did today was just phenomenal,” Braves manager Brian Snitker said. “And Matzek’s been doing it the entire series. I would like to cut that MVP thing up and give him a little piece of it, because that guy was just spectacular the whole series.”

With the win, Braves franchise stalwart Freddie Freeman earns his first trip to the Fall Classic. Selected by the Braves in the second round of the 2007 draft, Freeman was the one player the Braves kept when they methodically dismantled their last contending club, signing him to an eight-year extension in 2014.

Freeman starred for a number of losing teams during the early years of that contract, but now with the pact due to expire after this season, he also has experienced the team’s complete turnaround.

“I think this might be the definition of pure joy,” Freeman said. “It really is. I really don’t, it hasn’t hit me at all. I don’t really know how to feel.”

The win was also the cherry on the top of the long career of Snitker, a Braves lifer who has been with the organization since 1977. Snitker, who turned 66 during the series, played for the franchise in the minors then worked as a roving instructor after being hired to remain with the organization by Hall of Famer Hank Aaron. He managed in the minors for years before coaching in the majors.

Now Snitker is at the pinnacle of his profession with the only organization he has known.

“I just kind of sat in my chair and them guys swamped me,” Snitker said. “I was just hoping I could hold it together because a lot comes at you. After all the years and everything you go through and now to be able to experience this, it’s really something really cool.”

For the Dodgers, the loss kicks off what could be an offseason of change, with several of their star players headed for free agency. The list includes Max Scherzer, Albert Pujols, Corey Seager, Kenley Jansen, Chris Taylor and longtime ace Clayton Kershaw. https://rullyseptian.over-blog.com

With the Dodgers’ repeat bid ending, baseball will go without a back-to-back champion once again. No one has repeated as champions since the New York Yankees’ three-year streak from 1998 to 2000. It’s baseball’s longest stretch without a repeat champ.

“It’s still not lost on any of us that we didn’t accomplish our goal,” Dodgers manager Dave Roberts said. “But for me, I’m giving credit to the Braves, because they outplayed us, plain and simple.”

The Braves will meet the Houston Astros in the World Series, with the opener slated for Tuesday night at Minute Maid Park in Houston. It will be a family reunion of sorts: Snitker’s son, Troy, is a hitting coach for the Astros.

Atlanta has gone 16 straight postseason appearances without winning a championship, the longest streak in baseball history. Perhaps that’s what Freeman was thinking when, as he walked out of the interview room, exchanging places with Minter and Matzek, he stopped and yelled back at the podium.

Impact of COVID-19 on Polyol and Polyurethane Market : Implications on Business