Elon Musk, Like Bill Gates And Steve Jobs, Has Achieved Extreme Success
The entrepreneur Elon Musk had a question for the writer Ashlee Vance when they first got together to talk about whether Musk would help Vance prepare a book about him. 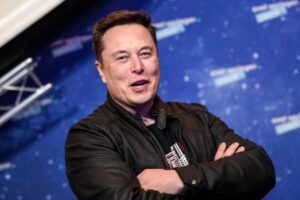 Vance never got around to saying exactly how he answered this question, but his new book did. Musk, it turns out — is not insane, although the question is not completely unfounded.

Musk’s business mission is to turn us into an interplanetary species and thus increase our odds of long-term survival, along the way completely reinventing our transportation system to be finished with fossil fuels. It’s a safe bet that he won’t step down as CEO of the aerospace company SpaceX until its technology lets him stand one day on Mars.

Is that the vision of a madman? Or just one very determined entrepreneur?

If the name Elon Musk is one you don’t know, it’s time to learn it. He’s the CEO of the electric car builder Tesla Motors, in addition to SpaceX, and serves as chairman of renewable energy company SolarCity. Years after the retirement of Microsoft co-founder Bill Gates and the death of Apple’s Steve Jobs, this South African-born, Canadian-American industrialist is easily the most compelling business figure in the country.

One of the most interesting aspects about how Vance described him is his disdain for the pitifully small ambitions that now animate many executives in the hotbed of innovation known as Silicon Valley. They talk about making the world a better place when all they really seem to work on are clever new ways to sell advertising on smartphones.

It’s not just the scale of his ambition that makes Musk a remarkable story, though. It’s also how far he’s already gotten turning these fantastic business dreams into reality.

Tesla Motors just reported a quarter with more than $1 billion in revenue. As Vance pointed out, Musk is the first successful entrepreneur in the auto business since Walter Chrysler, who started in 1925.

Musk may have become a modern-day industrialist, but he comes out of Silicon Valley. His accomplishments included getting the online payments company PayPal going. Maybe the simplest way to describe his approach is bringing the entrepreneurial, get-it-done-now mentality of a Silicon Valley start-up into traditional industries.

One good story comes from the early days of SpaceX, when an engineer informed Musk that a supplier would happily provide a key part called an actuator for about $120,000 each. Musk laughed, described the actuator as no more complicated than a garage door opener, and insisted the ­engineer “go make it work” for no more than $5,000. After months of long days, he did, with the SpaceX design costing about $3,900.

While it sounds great that Musk can get that kind of result, Vance also tells the unhappy story of SpaceX executive Ken Bowersox, a former astronaut.

When a rocket engine part made it all the way to the test stand with a fatal flaw, described in the book as the equivalent of a coffee cup without a bottom, Bowersox insisted that the company find out and then fix whatever was so broken in the design process that such a part could’ve been built in the first place.

Musk said that was a complete waste of time, he had already surmised what went wrong. Bowersox was soon gone, one of many A-list employees Musk has churned through.

No one, of course, is pushed harder than Musk pushes himself. Vance pointed out the irony of an entrepreneur spending a lot of time talking about the survival of the human race while he appears to be all but working himself to death.

When the author told Musk how impressed he was on a Saturday afternoon to see the SpaceX parking lot filled and so many employees at their desks, an unimpressed Musk grumbled that he was about to send out an e-mail complaining that the company had gotten “soft.”

Asked how he could possibly keep up his own grueling schedule, Musk replied “I had a tough childhood, so maybe that was helpful.”

Speculation about what drives Musk’s otherworldly ambition doesn’t come up much in the advice chatter for entrepreneurs about “how to be more like Elon.” It’s a little bit of his success other entrepreneurs seem to crave, not insight into why he wants it. Even mainstream media players like Fast Company have tried to provide some “be like Elon” wisdom.

Yet it’s all but impossible to see how Musk could be the model for any of us in business with more down-to-Earth ambitions.

One of the people the author turned to for insights was Musk’s former wife, the writer Justine Musk. When they were married, she frequently had to remind Musk that she was not an employee at one of his companies. He usually said that it was a good thing, too. Otherwise she’d have been fired.

The two have managed to remain friendly. And we learned a lot more about Musk earlier this year, after she responded to a question on the Internet site Quora about what it took to achieve the greatness of Steve Jobs, Bill Gates and Elon Musk.

Being successful means being accomplished, affluent and having a pretty good shot at being happy, she wrote. That isn’t the success these people have.

What they achieved, she continued, only results from having an “extreme personality.” It costs them many other things and “happiness is more or less beside the point.”

Extreme success starts with being completely obsessed about solving a meaty problem. Getting there will require years of putting up with little sleep, loneliness, crushing setbacks, jet lag, people who bore and annoy you, and “dark nights of the soul.” There is no well-worn path. There are no role models.

And, she added, they’ve learned how “to handle a level of stress that would break most people.”

If you’ve read this far and still think you want to “be more like Elon,” here’s another little lesson for you: People like Elon Musk don’t spend their Sunday mornings leisurely reading a column about how to be like Elon Musk.

How to Find the Best Tattoo Supplies

How a Christian Ministry Functions inside the Modern World

How To Start To Be Less Vunerable To Eye Bags Condition