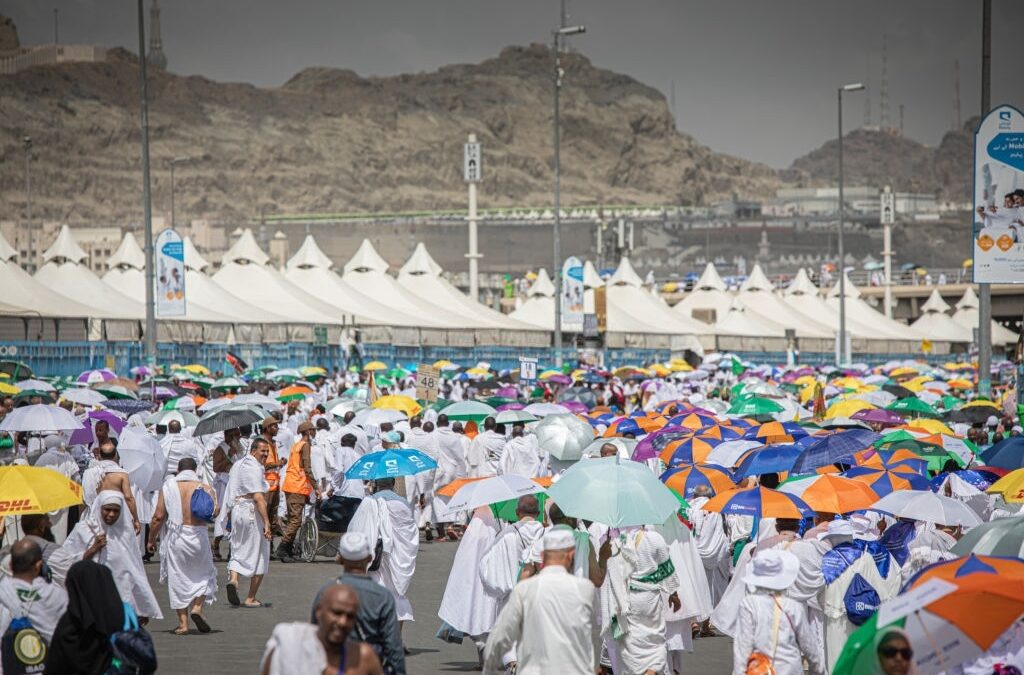 Holy Kabah is the sanctified site for Muslims, and it is always brilliant and eye-catching, whether enlightened by sunshine or the Masjid Al-Haram’s night lights. In its lovely black covering, which is embellished with Quranic Verses, Holy Kabah appears more graceful and exceptional. The black drape, known as “Kiswah,” is a sign of Holy Kabah’s majesty and honor. Kiswah is an Arabic term for ‘Pall,’ which literally translates to “Fine Cloth”.

Since Hazrat Ismail’s (AS) time, the practice of covering the Sacred Kabah with cloth has been continued. The Quraish Tribe was responsible for installing the Drape before the Holy Prophet Mohammad (ﷺ). Holy Kabah cover was ordered from Yemen by Our Beloved Prophet Mohammed (ﷺ) and Khulafa-e-Rashideen (the 4 Caliphs of Islam). The emperors began ordering Kiswah made with silk from Egypt and Yemen during the Abbasi reign. Years had passed, and a succession of Caliphs had ordered the Kiswah in a variety of colors, including red, green, and yellow. At last, Khalifah Mamun-ur-Rasheed decided to make Kiswah only in black color because the pilgrims’ minds were disturbed by the continuous color variations. Up to the present, the cover of Kabah is continuously replaced every year, but the color remains constant.
Egypt gave the first cover of the Holy Kabah as a gift, which was made of black silk and manufactured in Egypt until World War I. However, due to the uncertainty in the war, Egypt was unable to provide Kiswah to Saudi Arabia. Then, King Ibn Saud decided to manufacture Kiswah in Saudi Arabia and established a factory in Makkah to do so.

In Saudi Arabia today, over 200 men have spent eight months preparing the Kiswah with gold embroidery work. Each Kiswah has 670 kilograms of premium-quality silk imported from Italy & Switzerland, as well as 150 kilograms of both the silver and gold-plated thread from Germany. Calligraphy art is the ideal way for the purpose of decorating Kiswah. Several verses of the Quran, especially those related to Hajj, are embroidered on it by using gold-plated threads. The present or modern Kiswa has 18 parts. They make up the main covering and also a special and beautiful panel that covers the Sacred Kabah’s door. Now, the Kiswa is draped over the top of the Holy Kabah and can often be difficult to reach for pilgrims who are performing Tawaf below.

Holy Kabah is covered with Kiswah, which is fixed by copper rings at its base. Every year, on the day of Arafah, the sacred Kabah receives a new Kiswah. The old or replaced Kiswah will be cut and distributed to senior government officials and also religious organizations. The Kiswa is widely regarded as the world’s best piece of Islamic art and calligraphy.
In order to experience the beauty and grace of Kiswah and to see the Sacred House of Allah Almighty, book your December Umrah packages 2021 provided by Muslims Holy Travel and take advantage of the best deals and amenities.

How to book a luxury yacht in Dubai?

How Can I Change my Ethiopian Flight Date for Free?

Tips to take care of while travelling for senior citizens