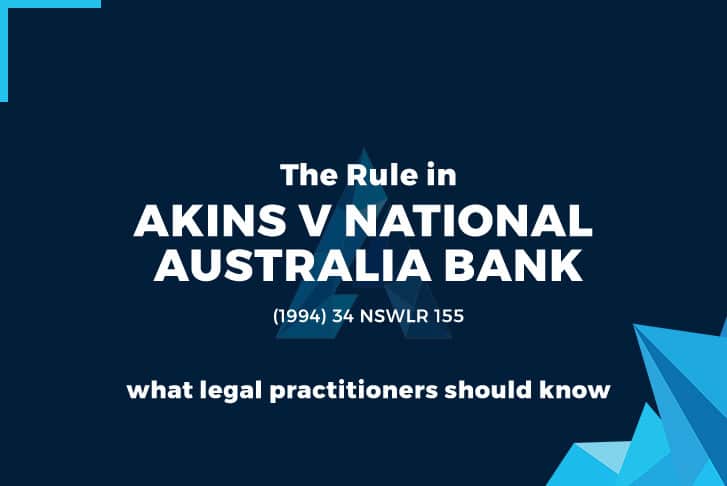 In Akins v National Australia Bank, the New South Wales Court of Appeal considered the relevant principles of an application to call fresh evidence. Although the rule that the court considered only allowed fresh evidence on special grounds, the criteria which were applied assist in cases like this. The test the court applied had three conditions:

(a) The evidence could not have been obtained with reasonable diligence for use at the trial;

(b) The evidence must be such that there is a high probability that there would be a different result; and

(c) The evidence must be credible.

In essence, the High Court of Australia had to consider if the explanation of the obligations to which the wife entered into was adequate and whether there was any undue influence in relation to taking up the mortgage.

Whether this was a case whereby the wife’s position in the transaction was one of suretyship without any recompense, except the advantage of the husband, and that the wife saddled herself of her property with liability for her husband’s debts.

The Court considered that regardless of the view taken about the present validity of the formulation of principle contained in the judgment of Justice Dixon in Yerkey v Jones [1939] HCA 3; (1939) 63 CLR 649, the particular circumstances of this case, are such that an appeal would enjoy no real prospect of ultimate success. Accordingly, the application for special leave to appeal was refused.

“Heart of Glass”: Peek behind the curtain in Miley Cyrus’s eccentric home