The synthetic rubies and sapphires, so prevalant in the 1920’s have a long history of creation.

In 1817, Guy-Lassac realized that heating ammonium alum would produce aluminum oxide and the actual process of synthesizing corundum started.

In 1837, experiments began to synthesize corundum with Gauding and Fremy. They had no success and Fremy gave up in 1870.

In 1873, Auguste Verneuil with Fremy as his assistant at the time, in Paris at the Museum of Natural History, began to work together to synthesize corundum.

In 1876, after many experiments, ruby synthesis was understood and repeatable although it was not understood how sapphire, called, “bug juice” synthesis took place. The blue corundum color that was created was not a fine blue color and the process could not be repeated.

In 1886, Verneuil, a gem expert and Fremy worked together with Jannettez while they were still at the Paris Museum of Natural History. Verneuil came to realize that fusing powdered alumina and chromium with the oxygen hydrogen torch made synthetic corundum.

At some point between 1886 and 1892, Verneuil discovered flame fusion. Later he realized that using different elements would create other synthetic gemstones.

In 1894, Fremy died. In 1902, Vernueil came to realize that fusing powdered alumina and chromium with the oxygen hydrogen torch at 2000 degrees Celsius made small particles of synthetic ruby.

In 1902, he announces that he is capable of creating synthetic ruby in a large enough size to use in jewelry.

In 1909, Vernueil realized that synthetic sapphires could be created with the addition of iron and titanium and in 1911, he and his employer, the Heller Company, were given two patents for this discovery.

In 1940, Union Carbide used this same method to create the “Linde Star” sapphire.

In 1959, Carroll Chatham, after many years of experimentation discovered the flux melt procedure to produce culture grown rubies, different than synthetic rubies.

In 1968, there is still question in the mineralogy world as to the chemistry of blue sapphire. 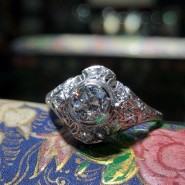