Istanbul Through the Eyes of National Geographic 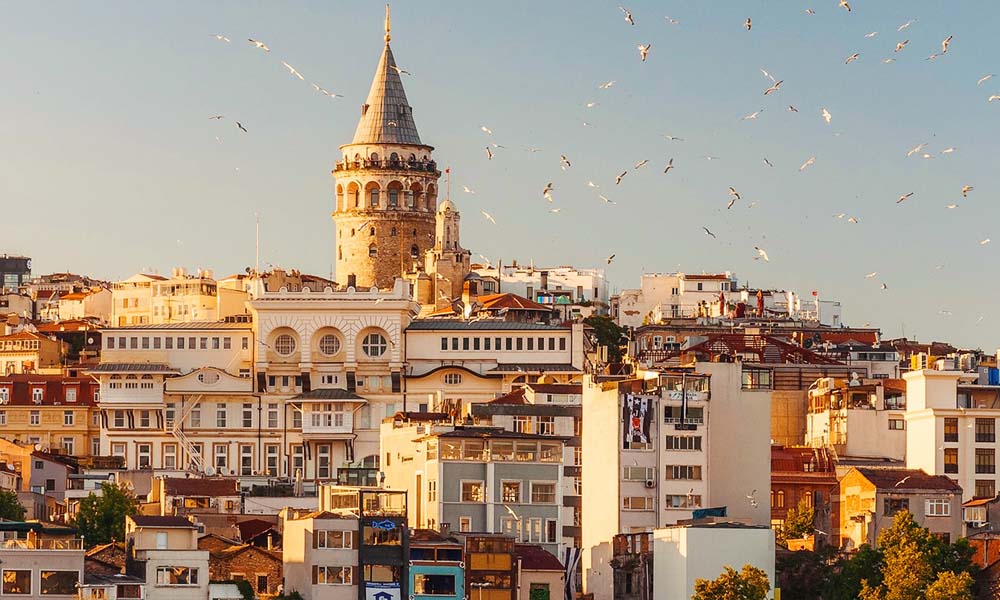 ‘For fifteen years I grew up watching the beauty of the Bosphorus from the hills above Bebek. Istanbul and the Bosphorus have certainly played a very great part in my love of nature, to which I owe my success in my career.’

These are the words of Dr Gilbert H. Grosvenor, editor of the world famous National Geographic Magazine for 55 years, who was born and brought up in Istanbul. They are taken from an interview with journalist Haluk Durukal in 1950. At that time Grosvenor could not have foreseen that exactly fifteen years later the National Geographic Magazine’s photographs of Istanbul would be shown at a major exhibition at the Ottoman Imperial Mint. Grosvenor explained that the magazine had nearly two million photographs in its archives, and declared that ‘the largest collection of all is that depicting the country where I was born and Istanbul, the city where I grew up.’

The boys had been born in Istanbul, then capital of the Ottoman Empire, and spent their childhood and early youth there. Their unusual background attracted the attention of inventor Alexander Graham Bell, one of the founders of the society who was to become its president in 1898.

Years later Gilbert Grosvenor said in the same interview, ‘I can never forget the Galata Bridge, which we often crossed with my father. Albanians, Greeks, Bulgarians, Arabs, Easterners and Westerners were to be seen, as if people of all the nations of the word had come together in this legendary city, bringing their own customs and cultures. I used to wonder if there could be another city on earth like it.’ Gilbert Grosvenor became first assistant editor of the National Geographic Magazine, and in 1899 succeeded Bell as the National Geographic Society’s president.

In 1900 he was appointed editor of the magazine, which entered a new era under his direction. In 1901 the number of subscribers rose from 1000 to 74,000, and by 1915 there were 424,000 subscribers. When Grosvenor retired in 1955, 2.2 million copies of the National Geographic Magazine were being printed each month. Grosvenor was succeeded by his son Melville Bell Grosvenor, who retired in 1967, to be succeeded by his own son Gilbert Melville Grosvenor, who is currently chairman of the board of trustees of the National Geographic Society.

The exhibition of photographs of Istanbul from the archives of the National Geographic Magazine, which has been documenting the world and its transformations for over a century now, is being organised by Is Bankasi, a bank which has played a major role in Turkey’s own transformation from a largely agricultural to an industrial society.

Writer Murat Belge has described the exhibition in the following words: ‘”To see with on’so own eyes” is an expression which is used in many languages. Photography shows us what other eyes have seen.

This exhibition brings photographs produced for other eyes in which we are the main protagonists. Now we are the viewers of ourselves as we were once seen by others. “That is us!” we exclaim.’

The photographs of the people, buildings, streets and monuments of Istanbul in the last years of the Ottoman Empire and the first fifty years of the Turkish Republic create a vivid picture of this eventful period. They reflect the faces of a people tired after years of war and the varied costumes of immigrants to the city from Anatolia, the Balkans and Caucasia.

We are reminded of the change-over to a new Turkish alphabet, that memorable winter when the Bosphorus iced over, and many other events in our recent past that the older generation remembers but the younger has only heard about. As Murat Belge says, it is like looking at ourselves in funfair mirrors, and suddenly realising that it is indeed us.

Planning a trip to Istanbul soon? Check this page: https://madeinturkeytours.com/istanbul/

Before Obtain Into Online Casino

The Business Of Custom Printed Cotton Bags Is Soaring, Grab A Share

Helping Your Toddler Adjust To A New Baby

When to Choose a Personal Coach Over a Therapist?

Common reasons for your car battery to die quickly

Increase the Beauty of Home With Rugs