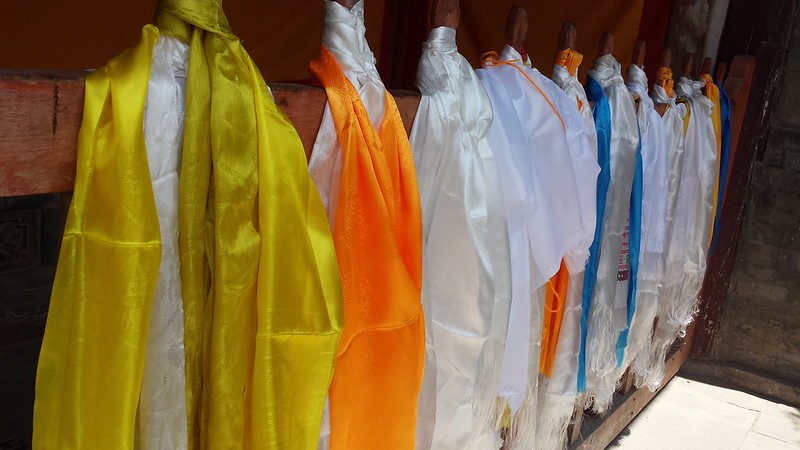 Learning some Etiquette before traveling to Tibet is helpful to understand the Tibetan life.

The Origin Of Tibetan Khatas

There is no historical data to find out which dynasty Khata scarf originated from. There are many folk tales. One of them is that Zhang Qian of the Han Dynasty went on a diplomatic mission to the western regions to pass Tibet and presented silk to the Tibetan tribal leaders. In this way, the Tibetan tribes think that this is a kind of etiquette to express friendship and blessing, and it is a great etiquette from the prosperous states in the Central Plains, so it has been used up to now. Later it was said that the Khata scarf was the ribbon of the fairy, and it symbolized holiness and supremacy. The people tried to imitate each other and gave Khata to each other, hoping that they would be happy.

Offering “Khata” means to show purity, sincerity, loyalty, and respect to the other party. It means differently in different situations. During festivals, people present Khata to each other to congrats happy holidays and life; during the wedding ceremony, people carry Khada to wish the new couple affectionate and to be with each other forever; during greetings, people present Khasa to pray for bodhisattva’s blessing; during funerals, people offer Khata to express their personal condolence for the death and comfort for the family.

How Do Tibetan People Present Khatas

The action of presenting “Khata” varies from person to person. Generally speaking, it is necessary to hold the Khata with both hands, hold it high and level with the shoulder, then stretch forward and bend down to give it to the other party. At this time, Khata is leveling with the head, expressing the respect and the greatest blessing to the other party. The other party holds it with both hands in a respectful gesture. When presenting the Khata scarf to the elders, raise your hands over your head and lean forward slightly to hold the Khata in front of your seat. For peers or subordinates, you can tie Khata around their necks directly.

Also, Tibetan people always enclose a mini Khata in the letter for greeting and expressing good wishes. What is particularly interesting is that Tibetans also take several pieces of Khatas on their journeys in case they encounter friends or people being apart for a long time, they can show goodwill.

Tibetan Khatas Are Most Common Gifts

In Tibet, it is customary to offer a white Khata scarf as a gift for weddings, funeral, festivals, and receptions, for meetings with venerable elders, worshiping Buddha, and seeing somebody off. The Buddhist monks offer each other Khata as gifts or present it as offerings to the living Buddha. Tibetan people have admired white since ancient times and believed that white is a symbol of purity, auspiciousness, sincerity, kindness, and justice, so Khata often uses white.

And you also can see five-color Khata scarfs putting in front of the Buddha statue, or hung on the top of the shrine and the Buddhist Thangka paintings. The five colors are blue, white, yellow, green, and red. Blue indicates the sky, white indicates clouds, yellow indicates earth, green indicates river, and red indicates protective Gods separately. The five-colored Khata is only consecrated to Bodhisattva and close relatives as the most precious gift.

Creepy Things That You Must Have From Halloween Store

What Things To Recollect When You’re Changing Your Address?