A Journey from a Classic to a Modern World: Chandelier Lights

A branched candle holder to an electric-light holder suspended from a ceiling, the chandelier has travelled through time and adapted itself according to the requirements of people.

The word chandelier has been borrowed from the Modern French word chandelle, meaning candle, which further has its roots in the Latin candēla. It was first used in the English language in 1736.

Since the classical period, Chandelier lights have always been a part of décor, and they still don’t fail to bewitch people with their charm. It has always been on the top of the list of décor lightings. 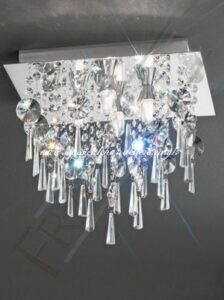 Here is the journey of chandelier lights from churches through royal palaces to a common household!

Classical Lights: chandeliers were not a status symbol or an item of luxury from the beginning but just a source of light.

The most distinct feature of the classical chandeliers is the array of hanging crystal prisms to illuminate a room with a refracted light. These still can be seen in museums and royal palaces.

Contemporary Lights: the designs of contemporary chandeliers are more minimalist, and they do not contain prisms to illuminate a room with direct light from the lamps. Instead, they are sometimes lamps are covered with translucent glass cover.

Modern Lights: Modernization has an impact on chandeliers too. From the 20th century, chandeliers are being used more as a decorative focal point for the space hung rather than just light illuminators. In the modernized lights, LED bulbs have replaced candles and filament bulbs. They blend both classic and contemporary designs as some modern ceiling chandeliers are equipped with refractive crystal prisms or small mirrors.

To make chandeliers affordable and accessible to all, they are stainless steel, glass, and new wood. In addition, metal chrome polishing makes them more durable and sturdier. Now one can get the desired piece in various sizes, colours, number of bulbs, light fittings, and other configurations according to specific requirements.

Their use is not just limited to luxurious homes and grand hotels, but now they can be hung in any corner of the property irrespective of the space area. You can find a wide variety of contemporary and modern chandeliers both online and offline stores. Not just readymade chandeliers but parts and accessories are also available in the market, so you can also get your old chandeliers transformed into a brand new one.

Thus, chandeliers have adapted to the modern world and have kept their position on the top of the décor list!

What is Brazilian laser hair removal?

Is Roller Blinds Easy To Fit?

Know the Value of Leather Alterations

Different and Unique Home Renovation Ideas for You

10 Things To Revamp Your Dining Experience