Home > Technology > Magento vs Shopify: Which Platform Is the Best for Your Business?
Technology

Magento vs Shopify: Which Platform Is the Best for Your Business? 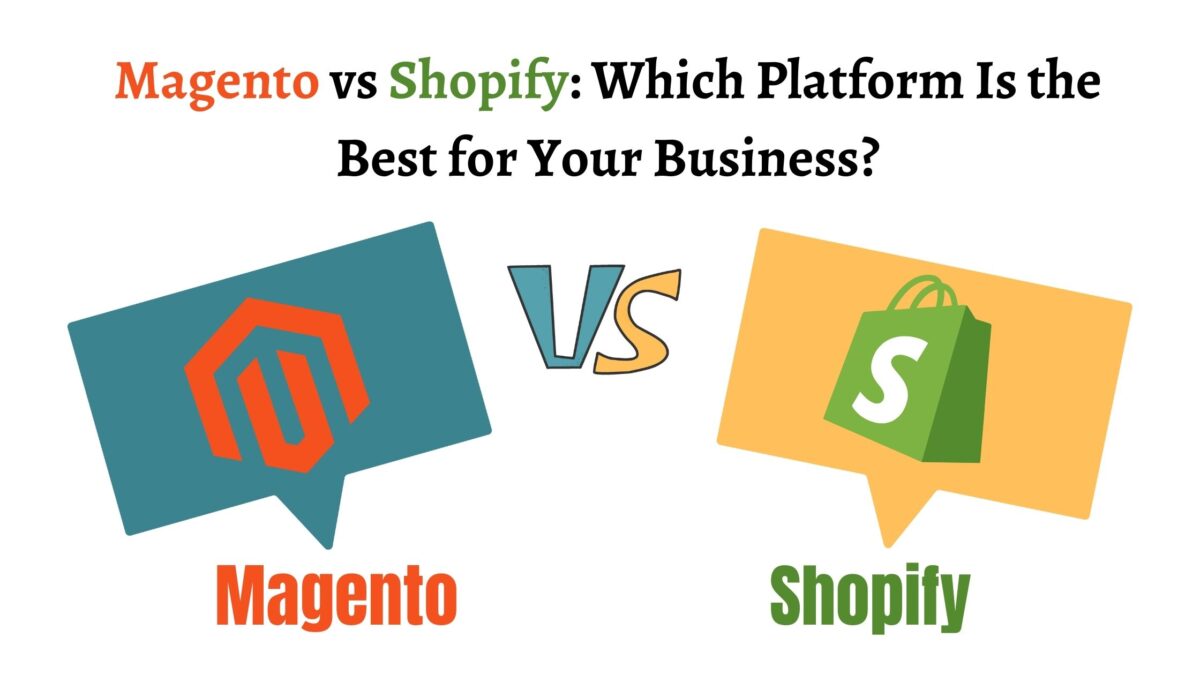 Both Magento and Shopify are the two most popular eCommerce development platforms. On one hand, Magento powers 12% of the eCommerce websites whereas Shopify is not far behind with its 8% stake over the market.

Not only the statistics but there are also plenty of occasions where choosing the better between these two can be a tough job.

The best way to make a prolific choice is to consider the project requirements with a peer-to-peer alignment between anticipated deliverables and available resources.

This blog post shall walk you through the most fundamental parameters of eCommerce development.

Magento provides extensions that can help you create a customizable eCommerce experience. These extensions can be used to implement different functionalities more compatibly using your technical understanding of SOLID principles, PHP as a programming language, and HTML, CSS & JavaScript as frontend technologies.

Shopify is a hosted eCommerce platform mostly containing standardized themes and templates that can be customized. A Shopify development company or team of developers utilize their programming compatibilities to enhance the existing view of their applications to a certain extent.

We can say that it is easy to create an appealing eCommerce application using Shopify faster. However, many developers using Magento argue the uniqueness of eCommerce web applications using the platform.

Since eCommerce applications are used by a versatile audience of different age groups and geographic regions, it becomes important to keep the design appealing and easy to grasp. Both Magento and Shopify have been proven efficient eCommerce platforms in this direction.

Since Magento is self-hosted and requires developers to have a good understanding of programming languages, we can say that it provides more opportunities to use your creativity and knowledge to do what is best for your project using the subtle development infrastructure provided by Magento.

Shopify certainly is good for those who have less time to create a user-oriented, well-designed, and easy-to-operate eCommerce store but after a time many merchants may require to invest more resources to upgrade things as their business demands evolve with time.

Since Magento is open source, we can it the upper hand in terms of customizability. While on Shopify, you may need to switch plans to implement your ideas. You can explore a Shopify eCommerce development guide to get a more open understanding of the process.

Those working on Shopify may experience a fast and intuitive user experience on the eCommerce applications they would develop. On the other hand, a Magento development company would need to synchronize between plenty of things altogether i.e. creating different cache layers including caches for system configuration, layout XML, block HTML output, and full-page generation.

Magento is an efficient eCommerce CMS but it certainly requires a technological understanding lacking which can leave you not using it to the fullest.

Magento requires its users to keep upgrading and implementing new security patches in order to avoid any security-related discrepancies on their applications. The eCommerce framework leaves developers with two choices; either they can wait for the updated module release from the vendor or update the modules manually by themselves. If we consider the Magento eCommerce development guide, you will understand that the process of creating eCommerce apps on Magento may require developers to put in more resources to patch the security vulnerabilities.

On the other hand, Shopify takes the complete responsibility of overseeing the security needs of your eCommerce store. Once you have subscribed to their plans, they can tackle the challenges related to data security, up-gradation, and web app security.

Both Magento and Shopify provide a support system in the form of community forums and dedicated support from technical associated working with the framework companies. Working on these platforms, your queries might differ in terms of technical complexity. But, it will not be a good practice to which framework is better as both of them are tackling different challenges in different conditions.

As we conclude this blog, we can see that both Shopify and Magento show crucial advantages at different stages of eCommerce product development and parameters. It is less about comparing the best and more about coming up with the best-suited eCommerce development framework for your project. Henceforth, we would recommend that you consider your needs and match which one is offering what.

Do You Reuse Empty Gloss Tubes Or Trash It Away?

How to Raise Startup Capital for your Small Business?

Machine Learning Market to Grow at a CAGR of 43.3%

The Top Online Resources For Your Toyota

Modernize Your Existing Data Center with us on Every Aspect: Ken Research

Methanol Market What will be the Short-term Impact of Coronavirus?