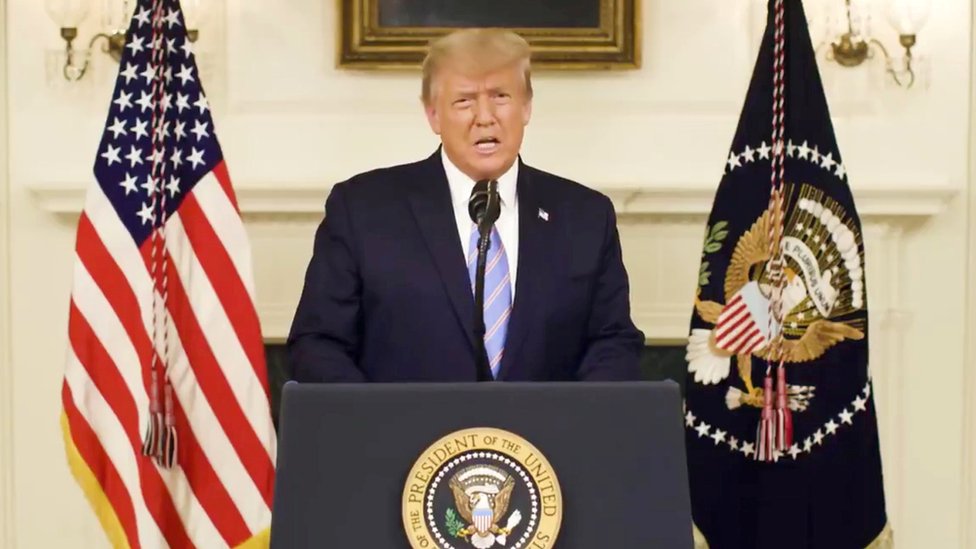 US President Donald Trump has been permanently suspended from Twitter “due to the risk of further incitement of violence”, the company says.

It comes amid a Big Tech purge of the online platforms used by Mr Trump and his supporters.

Some lawmakers and celebrities have been calling for years on Twitter to ban Mr Trump altogether.

Why was Trump banned?
Mr Trump was locked out of his account for 12 hours on Wednesday after he called the people who stormed the US Capitol “patriots”.

Hundreds of his supporters entered the complex as the US Congress attempted to certify Joe Biden’s victory in the presidential election. The ensuing violence led to the deaths of four civilians and a police officer.

Twitter warned then that it would ban Mr Trump “permanently” if he breached the platform’s rules again.

After being allowed back on Twitter, Mr Trump posted two tweets on Friday that the company cited as the final straws.

In one, he wrote: “The 75,000,000 great American Patriots who voted for me, AMERICA FIRST, and MAKE AMERICA GREAT AGAIN, will have a GIANT VOICE long into the future. They will not be disrespected or treated unfairly in any way, shape or form!!!”

Twitter said this tweet “is being interpreted as further indication that President Trump does not plan to facilitate an ‘orderly transition'”.

In the next, the president tweeted: “To all of those who have asked, I will not be going to the Inauguration on January 20th.”

Twitter said this was “being received by a number of his supporters as further confirmation that the election was not legitimate”.

Americans ‘shocked’ and ‘disgusted’ by riots
Questions mount over security failure
A visual guide to the Congress riots
Democrats plan impeachment
What was the reaction?
After Twitter had permanently suspended his @realDonaldTrump account, Mr Trump tweeted from the US president’s official @Potus account suggesting he would “look at the possibilities of building out our own platform in the future” and railing against Twitter.

But the tweets were removed from the platform as soon as they were posted.

Reacting to the ban, Trump 2020 campaign adviser Jason Miller tweeted: “Disgusting… if you don’t think they’re coming for you next, you’re wrong.”

Later in the day, Google suspended Parler – a self-styled “free speech” rival to Twitter that is increasingly popular with Trump supporters – from its online store.

Google suspends ‘free speech’ app Parler
“We’re aware of continued posting in the Parler app that seeks to incite ongoing violence in the US,” said Google.

On Thursday, Facebook said it had suspended Mr Trump “indefinitely”. The popular gaming platform Twitch also placed an indefinite ban on the outgoing president’s channel, which he has used for rally broadcasts. So has Snapchat.

Though critics said the posts were a torrent of misinformation, the medium helped him get around media filters and instantly connect with nearly 89 million followers.

His tweets were also known for the occasional spelling error, and he sometimes left followers guessing with apparent mis-types, such as when he posted, “Despite the constant negative press covfefe”.

The Department of Justice said in 2017 that Mr Trump’s tweets were “official statements of the President of the United States”.

Where will Trumpism go?

Donald Trump loves being on Twitter, it’s his primary way of getting his message out.

He likes the short format, he likes his ability to reach tens of millions of people at the click of a button – bypassing the media.

The fact that Twitter’s decision was made 48 hours after the rioting at the Capitol on Wednesday shows that this was not an easy move for the social media giant.

The platform has benefited hugely from Mr Trump’s participation, it has been the place to go to hear the latest from the most powerful man in the world.

But Twitter has acted for a number of reasons. It says it’s because of the likelihood of him inciting violence in the future.

But it’s also because his power is very quickly slipping away. He is now being treated like an ordinary member of the public.

And as mere mortal, repeatedly spreading disinformation, fake news and inciting violence will get you thrown off mainstream social media platforms.

For those who say this violates frees speech enshrined in the First Amendment of the US Constitution? Big Tech’s argument is that they are private companies, not state actors. So, they are free to moderate their platforms as they see fit.

The big question now is, can Trumpism survive without the backing of mainstream media? Or will it simply slip into the shadows of the internet?

What else did Twitter say?
Twitter wrote in a blog post on Friday: “In the context of horrific events this week, we made it clear on Wednesday that additional violations of the Twitter Rules would potentially result in this very course of action.

“Our public interest framework exists to enable the public to hear from elected officials and world leaders directly. It is built on a principle that the people have a right to hold power to account in the open.”

It added: “However, we made it clear going back years that these accounts are not above our rules and cannot use Twitter to incite violence. We will continue to be transparent around our policies and their enforcement.”

Some 350 Twitter employees had signed a letter this week to the company chief executive, Jack Dorsey, asking him to ban the president in the wake of the Capitol riot.

The letter said: “Despite our efforts to serve the public conversation, as Trump’s megaphone, we helped fuel the deadly events of January 6th.”

Later that same week it posted a warning label when the president threatened to send in the military to quell Black Lives Matter protests as he added, “when the looting starts, the shooting starts”.

Twitter used these fact-checks and warning labels increasingly throughout the year for Trump tweets about coronavirus and the presidential election, culminating in Friday’s ban.

Analysis of Potential Impact of COVID-19 on Functional Flours Market